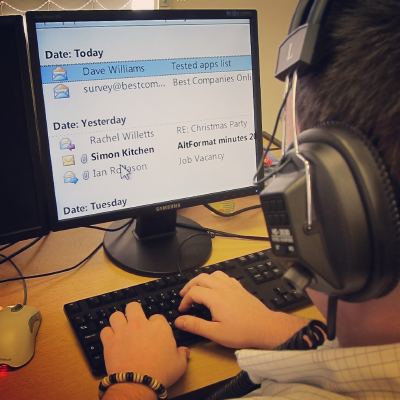 “We at Accesstech AG in Lucerne, Switzerland specialize in the adaptation of workplaces for blind and visually impaired persons. We deal regularly with environments that are equipped with Citrix XenApp.  For many years, whenever magnification and speech are required, we have used SuperNova to enable access for visually impaired people. The installation of Dolphin’s solution is transparent, which enables us to reassure Citrix administrators who are initially sceptical about a server installation.”

“For the visually impaired users it is important to be able to read magnified text within a Citrix session just as clearly as on a local PC. In this regard, has Dolphin a unique selling point in the Citrix environment. This is further strengthened by other features such as colour changer, large mouse pointer, cursor and focus highlighting which are often used. All these features are easily turned on and off while the Dolphin products are running in the session. The settings can be saved at any location.”

“If additional aids for the blind are used, such as Braille displays, you can integrate these via a remote interface in the Citrix client. As a solutions-oriented company in the field of aids for blind and visually impaired people we are happy to be able to use Dolphin’s products.”  [Translated from German]